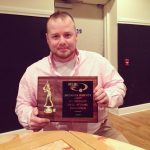 Brendan Roberts is owner and president of the Frozen Ropes training center in Albany, NY. Brendan has a wealth of baseball experience both as a player and a coach. After graduating from Shenendehowa in 1997, Brendan took his talents to SUNY-Oswego, where he graduated in 2001 with a Business Degree and Athletic Coaching Minor.

Coach Roberts career continued as a member of the Colonie Knights and Capital City Canes where he was a 17 time All-Star and perennial League Champion. The outfielder/catcher is the all-time leader in every major statistical category including Home Runs (78), RBIs (289), 2B’s (88), Runs (450), SB’s (333) and consecutive games played (329) for the NABA/MABL. After finishing up his MABL career, Brendan moved on to become a player coach for the Albany Thunder in the Albany Twilight League. In his 3 seasons there, he was a 2 time league All-Star and All League Player.  In 2016 Brendan was inducted into the CDMABL Hall of Fame.  Brendan currently plays for the Frozen Ropes Wolfpack in the CDMSBL League.  Frozen Ropes has won 5 Straight league championships while compiling a record of 144-13 in the last 5 seasons.  Brendan was the 2015 Playoff MVP and 2016 League CY Young award winner, where he had the lowest ERA (0.14) in league history.

Brendan is also the catalyst behind the Frozen Ropes teaching model. He has brought his vast experience, knowledge and outstanding communication skills to Frozen Ropes in 2004. He has spent hundreds of hours dissecting his own swing on video and his cerebral approach to hitting allows him to easily identify pitfalls in other athletes. Coach Roberts provides instruction on all phases of the game thru private, semi-private and group lessons and leads our clinic and advanced training programs. Brendan is extremely effective training players of all ages on the Frozen Ropes teaching philosophy and curriculum.

Brendan uses an old school approach with new school tech to reach all type of athletes.  Well versed in the use of Hit Trax, Blast Motion and Video Analysis, coach Roberts can help athletes of all ages improve. 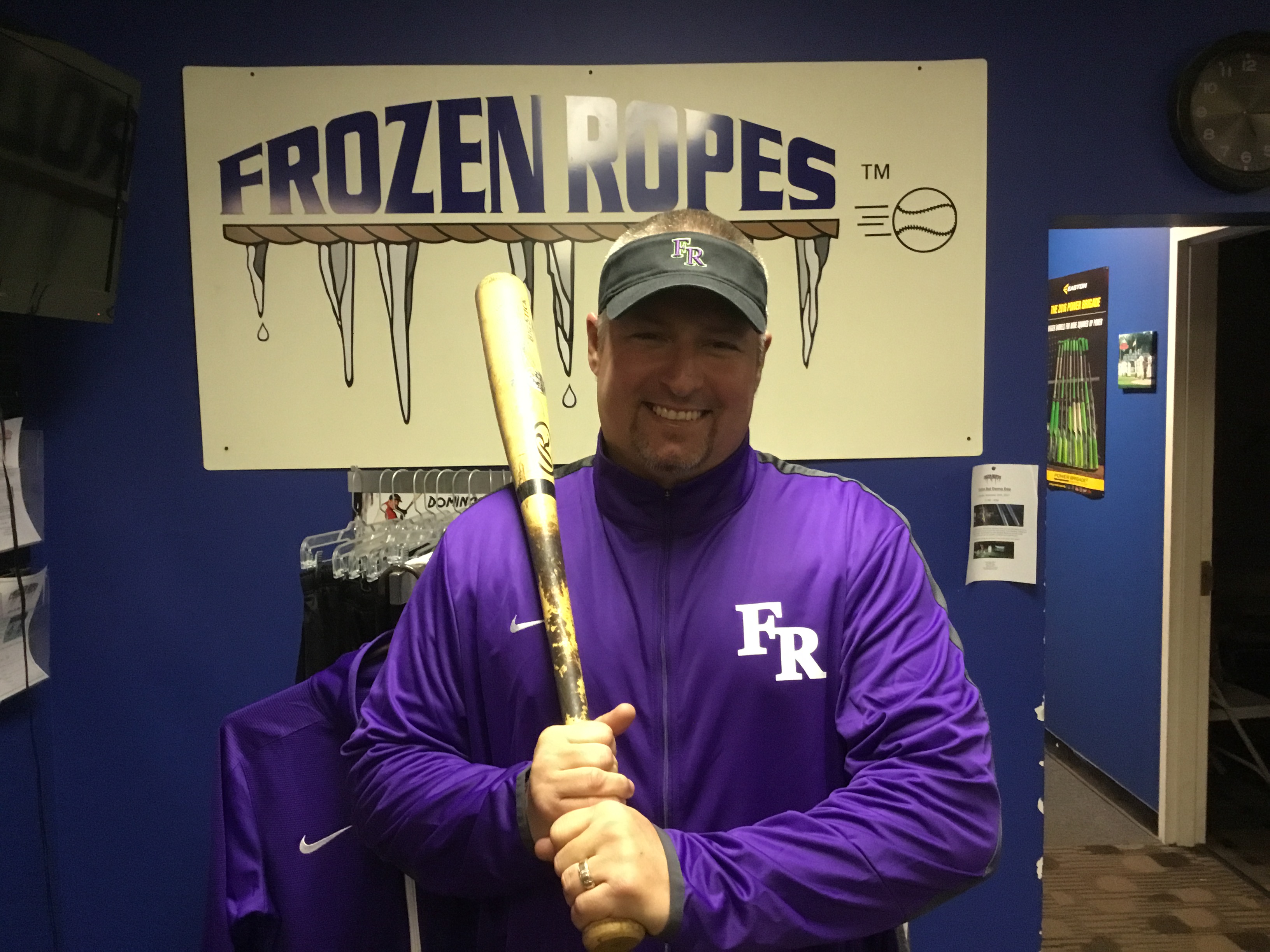 Quentin started out as an instructor in 2009, and then quickly moved into the General Manager and Director of Operations role in 2010. After excelling in these positions he decided In January 2015 to buy in and become Co-Owners with Brendan Roberts.

Quentin is responsible for the training program and instructional model used to prepare Frozen Ropes Albany students for success.

Previously he has created a Baseball Program at Green Tech High Charter School where he was the Varsity Head Coach, Health/Physical Education Teacher as well as the Athletic Director.  Currently he is teaching Physical Education at Greenwich HS, where he is also the Varsity Baseball Coach.  Q has also created a Greenwich Travel program for the High School athletes, ages 13-18.

Combining his experience as a player, coach and nationally certified Baseball Instructor, Quentin will provide players with an individualized program designed to get the most out of their ability and get them to their desired level.

Coach Q offers free coaching clinics for local leagues.  He can also help set up clinics for hitting and pitching for any leagues interested. 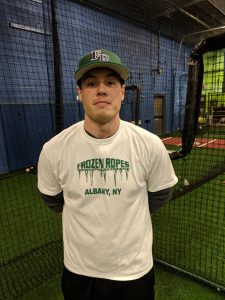 Zach is the architect of our pitching development program.  He grew up as a local athlete via Shaker High School.  After Graduating from Shaker in 2011, Zach went on to pitch at Schenectady CC and then on to Division 2, Barton College in Wilson, North Carolina, graduating with a degree in Sports Management.  At Barton, he was an All-Conference Pitcher and stills holds the schools all time E.R.A. record.

After his college playing career concluded, he Pitched in Independent Pro Ball for both the Watertown Bucks and the Plattsburgh Redbirds.  Now back in the area, he’s pitching in the Twilight League for the Albany Athletics.  Zach brings to us his vast knowledge of pitching, mechanics, conditioning and mentality to our staff.  He is certified by Rapsodo Baseball in Pitching Development and certified by Driveline Baseball in Pitch Design. 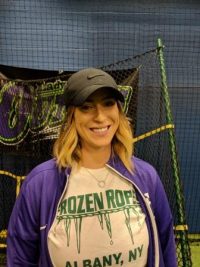 Rebecca is the newest addition to the Frozen Ropes Staff.  After a successful pitching career at Niagara Catholic, Rebecca moved to the Albany area and took a job as a teacher and Varsity Coach at Watervliet HS.  She joined FR in 2018 and leads our Softball Pitching classes.  Her knowledge of Softball Pitching is perfect to take your player to the next level. 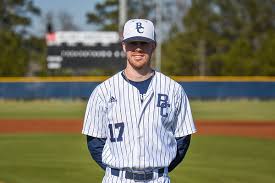 Jason has trained at Frozen Ropes since he was 7 years old. The Bethlehem, NY native played his high school baseball for the La Salle Cadets, where he hit .417 and was named a conference All-Star his senior year. He continued his playing career at Berry College in Rome, GA.

Jason concluded his collegiate career with an OPS of .915 and was a member of Berry’s first conference championship team. Graduating with a degree in Sports Administration, Jason interned at the National Baseball Hall of Fame and Museum the following summer.

In December of 2018, Jason was hired by the Toronto Blue Jays as their AAA affiliate intern. He spent the season with the Buffalo Bison’s of the International League, working directly with their coaching staff. At the conclusion of the AAA season, Jason had the opportunity to continue his work in Toronto with the Major League team. He is currently in his third year with the organization.

Jason has coached Frozen Ropes travel teams for parts of three seasons, compiling a cumulative record of 60-13-3. His teams have finished as runners up at the NABF 16u World Series and third at the Don Mattingly 17u World Series. He is certified by Rapsodo Baseball in Hitting and Pitching Development and certified by Driveline Baseball in Hitting Development and Pitch Design. 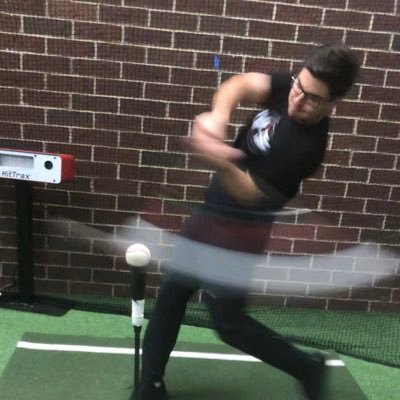 Eric is a Colonie, NY native who was a Frozen Ropes trainee at the age of 15. He attended Colonie Central High School and graduated in 2013. He then went on to play at local Junior College powerhouse Herkimer community college where he got his associates degree in Business Administration.

Downey hit .438 with a .556 on base percentage while also stealing 15 bases and scoring 57 runs over his two year career as a General. Eric then signed his national letter of intent to play at Division 1 St Bonaventure were he spent the 2016 season. Eric recieved his NYS Coaching certification from SUNY Brockport. Eric played two summers in the PGCBL for Saugerties in 2015 and Amsterdam in 2016, helping the Mohawks win a league championship that season.

Eric then chose to pursue a career in professional baseball and trained for two years at the prestigious Driveline Baseball facility in Kent, Washington. Eric then spent the two years playing for various independent baseball teams in leagues like the Pacific association, American association and the Frontier league. His coaching career began with Frozen Ropes summer camps in 2012. He’s held a position as the hitting coach of the Oneonta Outlaws in the PGCBL starting in summer of 2019. The 2019-2020 year he spent as an assistant coach of the Herkimer softball program and volunteer assistant with the Herkimer baseball program. 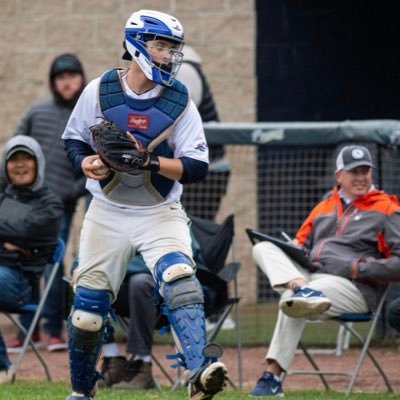 Ryan started his own baseball career at Frozen Ropes as a 3 year old in our Born To Play program.  He moved on to our older classes and private lessons and then began playing in our Outlaws travel program.  After a stellar playing career at Averill Park HS, his college career began.  Now playing for Division 2 Collge SNHU, Ryan has experience playing and competing at a high level.  During the Summer months the last few years, coach Deo has helped run our summer camp programs and on the side caught bullpens for local college and professional pitchers.

Coach Deo now runs our group training classes, and is available for private lessons in hitting and catching. 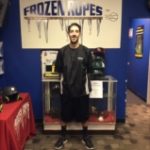 John “Pep” Ripepi Jr. began working for Frozen Ropes in 2016. John was a graduate of Amsterdam High School, Class of 2007. John was a 3-Sport star for the Rams, playing 3 years of Varsity baseball and soccer, receiving all league accolades in both sports.

After consideration of many local junior colleges, John decided to continue his education at the Massachusetts College of Liberal Arts (MCLA). While at MCLA, John spent four years in the baseball program where he started at shortstop for three plus seasons. He completed his playing career as the All-Time leader in steals in a season with 20. He continued his career at MCLA as an assistant coach while completing his degree.

A special opportunity occurred during this time, when John decided to pursue coaching as a minor. He latched on with Drury Regional HS as an assistant coach to the JV program, where he worked with fielders and hitters, as well as serving as the pitching coach for the team.

As an instructor, John has been working to help improve on hitting, fielding, and base-running aspects of the game. In addition to instructing, John is currently the Assistant Coach at Hudson Valley CC Baseball Team. 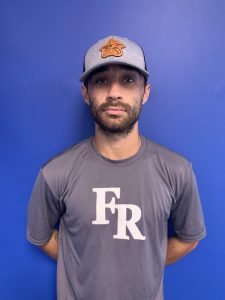 For high school, Skylar attended Syosset High School and during that time he started three out of his four years on varsity.  His sophomore year, he was the starting 2nd baseman as well as pitching in relief.  His junior year, he alternated between being the starting 2nd baseman and starting catcher.  Finally, his senior year he would switch between starting 2nd baseman and ace pitcher.  During this three year stretch on varsity he was a captain for his junior and senior year also receiving the Nassau County Newsday “Underclassman of the Week” award in his sophomore year for his standout work on the mound and at the plate.

For college, Skylar enrolled at Suny Maritime College where he majored in “International Transportation and Trade,” the school’s business program.  For his playing career, Skylar began as the fourth string 2nd baseman and as a relief pitcher.  By the first week of conference play in his freshman year, Skylar had been nominated the team’s closing pitcher based on his stellar outings both in inter squads and in non-conference games.  Skylar made the most out of every opportunity given, locking down every save opportunity that year while holding a 0.00 ERA for ¾ of the season.  Skylar held his team role as closer all three seasons (senior year taken by Covid-19) and finished his career with multiple schools records.  He holds both, the single season saves record with 6 and career saves record with 10.  He would also hold the school’s career ERA record with a 2.92 and the school’s K/9 record with 9.19 but didn’t qualify with his limited number of innings.

For Frozen Ropes Albany, Skylar is now running camps in the summer, giving lessons, and teaching classes.  He loves working with baseball and softball players, always trying to help them reach their goals of playing at the next level, whatever that level might be.