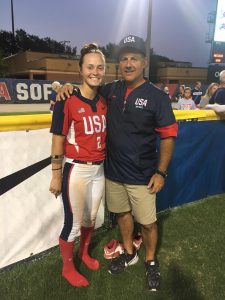 Warwick native, Tony Abbatine with TEAM USA softball player Ali Aguilar at the World Cup this month, earned a coaching position after a chance meeting with Head Coach, Ken Eriksen at a clinic.

Baseball and softball are more than just games to Warwick native Tony Abbatine. They are a way of life.His life took a special turn in 2014 when Abbatine was attending the same softball clinic as current Team USA head coach Ken Eriksen.

“I was there as a dad to support my daughter, Micaela, and a friend told me to talk to Eriksen,″ said Abbatine, founder and owner of Frozen Ropes baseball and softball training center in Chester. The conversation turned into a three-hour dialogue about the many aspects of softball.

“It was easy to see that Abbatine has an uncanny ability to communicate with the players, that the game is played and reacted through the eyes,” Eriksen said. “His communication with the players frees the mind to just play.″

Three years later, Abbatine was named one of 22 coaches in the national team coaching pool for competitions from 2017-2019 as the squad attempts to qualify for the 2020 Tokyo Olympics. Abbatine, the only non-college coach on the staff, has since been named one of just eight coaches hired for this year to work with the national and junior national teams. He is responsible for helping players prepare mentally and advising them on methods for adjusting to each opponent.

Abbatine played center field for the Monroe-Woodbury baseball team, graduating in 1977. He went on to play for the University at Buffalo, ending his playing career and pursuing a degree in business. Abbatine’s vision techniques have not only helped players at Frozen Ropes, but also former major-league stars Manny Ramirez and Mariano Rivera.

“In the major leagues, their bat speed combined with their physical specimen is tremendous,″ Abbatine said. “The vision component at that level becomes challenging, and if they can see the ball all the way until the ball reaches home plate, it’ll be easier to make contact with the ball.”

Abbatine has certainly had an effect on local players as well. “I wouldn’t be playing in the (Atlantic Coast Conference) if it wasn’t for Tony,″ said Kingston High graduate Olivia Lattin, the 2015 Varsity845 player of the year entering her junior year at Virginia Tech. Lattin, who played on Abbatine’s travel teams at Frozen Ropes, has started all 109 games in her two seasons at Virginia Tech, hitting .284 with 14 home runs and 50 RBI in her career.

“Tony has helped me become a better player in all aspects of the game, especially the mental side of it,″ she said. “When he coaches, he teaches different skills in different perspectives allowing you to better understand what you are learning. Tony’s best quality as a coach would be his ability to push players to challenge themselves instead of taking the easy way out.″